The Complete History of Bearings You Need to Know

Bearings are part of our everyday life. It would be incredibly difficult to picture the modern world without them, especially in the industrial age.

Any machine you can think of that involves motion in some way utilizes bearings to reduce friction and smooth its path. 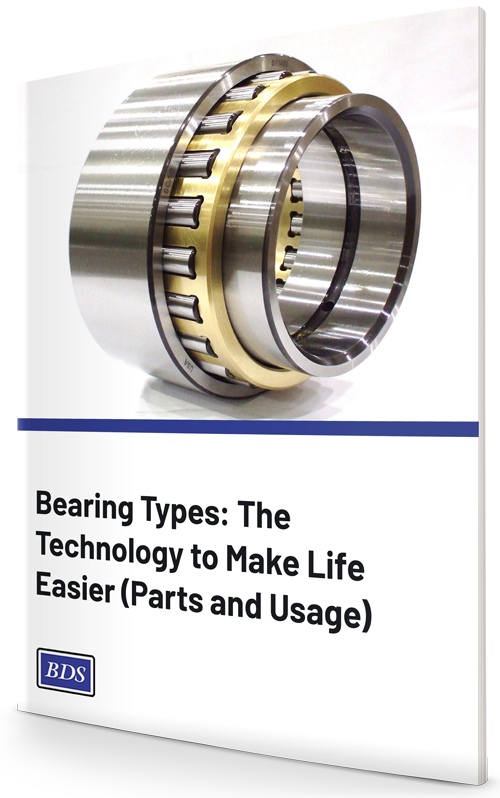 Get the PDF version to save to your desktop and read it when it's convenient for you. (No email required):

These vital pieces of technology did not appear overnight when the creation of metal machines began. In fact, bearings have a long history of use that goes back to the stone age.

Since bearings are vital to your customers' needs, it’s important to have a comprehensive understanding of how bearings were created and how they have evolved to provide us with the modern-day solution for various loads and jobs.

At Bearing & Drive Systems, we know that the worry of providing inferior products to your customers is real, but it doesn't have to be.

In this article, we discuss the complete history of bearings and their evolution to modern-day technology.

Source: "A Brief History of Bearings" by JVN Bearings FZE via YouTube

2600 BC - Ancient Egyptians used a form of roller bearings to assist in moving large stone pieces that were for the construction of the Pyramids.

40 BC - An early known example of a wooden ball bearing was used to support a rotating table. This example was found in the remains of a sunken Roman ship in Lake Nemi, Italy.

1500 AD - Blueprint drawings and the early concept design of a helicopter by Leonardo da Vinci used ball bearings. This is the first known recorded use of bearings in aerospace design.

1740 - John Harrison invents the first caged-roller bearing for H3 marine timekeeping. Little did he know, he used the same bearing in a contemporary regulatory clock.

1794 - The first patent for the ball race was awarded to Philip Vaughn of Carmarthen, Wales. His design incorporated a ball running along a groove in an axle assembly.

1869 - Parisian bicycle mechanic Jules Suriray receives the first patent for a radial ball bearing, which he fitted on the winning bike of the world's first bicycle race in Paris.

1907 - Sven Wingquist of SKF invents new self-aligning ball bearings. This set a new standard of design, and from it, innovations popped up like the wire race bearing in 1934 and the vee groove bearing in 1968, respectively.

The 1980s - Here, we saw the first bi-material plain bearing, which Robert Schroeder invented. Schroeder was the founder of Pacific Bearing.

The 2000s - Now, we see the ball and roller bearings used in all kinds of industrial applications, from wheel bearings in the automotive industry to ultra-high-speed bearings used in dental drills and anything in between.

Now that we’ve covered the timeline of bearing history, let’s dive into the more in-depth history behind how the idea of the first bearing was created and how it evolved to the modern-day types of bearings we use every day.

Ancient Beginnings of the Bearing

While the wheel is considered by many to be the first invention by early civilizations, the concept of the bearing technically has it beat. Since ancient times, humankind has worked to find and develop new ways to reduce friction.

By examining ancient Egyptian wall paintings, historians determined that the pyramids were built by standing massive, heavy stones atop one another.

But how did they move these heavy stones? Thanks to primitive rolling elements.

That’s right. According to a number of wall paintings depicting the pyramid construction, scholars have found depictions of logs being rolled underneath the massive stones. This was done to reduce friction and make transporting the hefty stones easier by exerting less force. [source]

This method of transportation paved the way for the idea of using rolling elements, also known as rollers, in bearings.

While this is the first recorded instance of humankind reducing friction, there are plenty of other records worldwide throughout history that differ in time periods and methods used.

This shows how important the reduction of friction to allow for smoother movement has been throughout human history.

Leonardo da Vinci, known as one of Italy's most influential Renaissance men, is considered the “father” of the modern bearing." Thanks to his insatiable curiosity, he left a significant impression on the world of art as well as the field of mechanical design.

Scholars found a sketch of a bearing in one of his notebooks, which is now regarded as a symbol of ingenuity that birthed bearings that reduce friction.

The structure that da Vinci sketched out consisted of two rings (known as races) that were above and below, as well as rolling balls (known as rolling elements) stuck between the rings and a “cage” so the balls do not come in contact with each other. [source]

The sketch da Vinci created is practically identical to the structure of bearings we use in the modern-day. This “basic bearing structure” of races, rolling elements, and a cage was thought up nearly 500 years ago thanks to the genius of Leonardo, and it pushed bearing technology forward in monumental proportions.

Although we credit Leonardo da Vinci with discovering the basic bearing structure, the building and mass production of bearings was still an untouched matter. It’s not until the Industrial Revolution that bearings became widely used in machinery.

How Bearings Fueled the Industrial Revolution

The Industrial Revolution lasted from the mid-18th century through the 19th century. This period is notable for bearings due to the large quantity production of steel. This allowed for high-strength bearings to be mass-produced for the first time in history, making bearings usable in a wide variety of industrial fields.

Plus, bearings were an integral part of the Industrial Revolution, thanks to their role in allowing the machinery to operate efficiently.

One of the most notable discoveries in the Industrial Revolution was axles using bearings. Initially, the ball bearing was used for axles in bicycles, which used a ball as its rolling element, which became widely popular.

The first modern recorded patent on ball bearings was awarded to British inventor and iron-master Philip Vaughan. He patented the first design for ball bearings in 1794, which were designed to support a carriage axle. [source] The design allowed for ball bearings to run along a track, or ball race in an axle assembly, therefore making it possible for wheels to rotate freely.

The Parisian bicycle mechanic Jules Suriray received a patent in 1869 for a radial ball bearing fitted into metal bicycles. The success of his improved design ended up creating several new types of metal ball bearings.

Later on, the roller bearing was developed, which used a roller as its rolling element and was used for axles in horse-drawn carriages. The discovery of the bearing-based axle propelled a leap in movement and transportation.

In the 20th century, improvements in bearings directly led to advancements in the military, automotive, and machine tool industries. The array of choices for rolling elements expanded from balls to rollers, spherical rollers, and tapered rollers. Not to mention, bearings now could support combined loads (axial and radial) and withstand greater forces.

Sven Winquist is known for his role in coming up with the design for self-aligning ball bearings, which revolutionized a new standard in terms of design. Winquist’s invention in 1907 led to a quick succession of innovations within the field, from the wire race bearing to the vee groove bearing. [source] The growing demand for ball bearings prompted the foundation of multiple specialty bearing companies.

According to Hartford Technologies, metallurgical processes improved as our understanding of chemistry widened. This led to harder, more wear-resistant materials and improved lubricants, making it possible for bearings to run at higher temperatures and speeds than ever before.

Today bearings are put to use in a variety of ways, both small and large. Some examples include Formula 1 cars, dental drills, gearbox and wheel bearings in the automotive industry, flexure bearings in optical alignment mechanisms, bicycle wheel hubs, and more. [source]

While bearings often go unnoticed in day-to-day life, it’s safe to say that our world would not be the same without the invention of bearings. The innovation that bearings brought on has allowed humankind to move heavy objects with ease and has created conveniences through modern machinery.

Furthermore, bearings have played a key role in developing human civilization and are a crucial testament to the ingenuity of our ancestors and the discoveries they made.

We know that finding authentic bearing and PT parts that you need shouldn't be a hassle.

Our global sourcing network solutions can help you find the authentic bearing and PT products you're looking to help you reduce downtime and guarantee the quality you and your customers deserve.

Tell us what you need and talk to a bearing expert today to help you get started.

My name is Dean Payne and I am the Sales Manager at BDS. I have been with BDS for 16 years and started when I was 18 years old in the warehouse. I have learned a little bit about bearings over the years and would consider myself a career-bearing guy at this point. I enjoy the challenges and the constant changing of nomenclature the bearing industry has to offer, you learn something new every single day.